Release notes for all versions of elm-geometry are available here.

elm-geometry is an Elm package for working with 2D and 3D geometry. It provides a wide variety of geometric data types such as points, vectors, arcs, spline curves and coordinate frames, along with functions for transforming and combining them in many different ways. You can:

...plus axes, planes, and various forms of 2D/3D coordinate systems:

A large range of geometric functionality is included, such as various forms of constructors...

Most types in elm-geometry include two phantom type parameters that allow compile-time tracking of both what units that geometry is in (usually either meters for real-world geometry, or pixels for on-screen geometry) and what coordinate system the geometry is defined in. For example, you might use a

elm-geometry uses the Quantity type from elm-units to track/convert the units associated with numeric values such as point coordinates, vector components, lengths, distances and angles. Internally, elm-units converts everything to SI units, so

have completely different units, so the compiler can catch nonsensical operations like trying to find the distance from the first point to the second.

2D/3D geometry is often represented using X/Y/Z coordinates. As a result, in addition to tracking which units are used, elm-geometry also lets you add type annotations to specify what coordinate system particular geometry is defined in. For example, we might declare a TopLeftCoordinates type and then add a type annotation to a point asserting that it is defined in coordinates relative to the top-left corner of the screen:

Note that the TopLeftCoordinates type we declared gives us a convenient place to document exactly how that coordinate system is defined. This combination now gives us some nice type safety - the compiler will tell us if we try to mix two points that have different units or are defined in different coordinate systems.

Assuming you have installed Elm and started a new project, you'll want to run

in a command prompt inside your project directory. Note that even though elm-units is a dependency of elm-geometry, you'll still need to explicitly install it so that you can import modules like Quantity and Length in your own code (which will be needed in basically any code that uses elm-geometry.)

In general when using elm-geometry, you'll need to import a module for every different data type that you want to work with; there is no "main" module. For example, to calculate the distance between two 2D points, you would import the Point2d module and write something like:

which should end up displaying "Distance: 283 cm".

Note that it was necessary to also import the Length module from elm-units, since the Point2d.distanceFrom function returns a Quantity Float units, not a plain Float. In general, in addition to elm-geometry modules, you'll likely need to import either the Length or Pixels modules from elm-units (depending on whether you're working in real-world or on-screen units) to work with any individual values returned by elm-geometry functions (distances, areas, point coordinates, vector components, etc.).

Full API documentation is available for each module. Most modules are associated with a particular data type (for example, the Point3d module contains functions for creating and manipulating Point3d values).

There are several other Elm packages related to elm-geometry:

I'm hopeful that in the future there will be packages that build on elm-geometry to do non-graphical things like 3D printing or CNC machining!

I would like for the projects I work on to be as helpful as possible in addressing the climate crisis. If

please open a new issue, describe briefly what you're working on and I will treat that issue as high priority.

Please open a new issue if you run into a bug, if any documentation is missing/incorrect/confusing, or if there's a new feature that you would find useful. For general questions about using elm-geometry, the best place is probably the #geometry channel on the friendly Elm Slack: 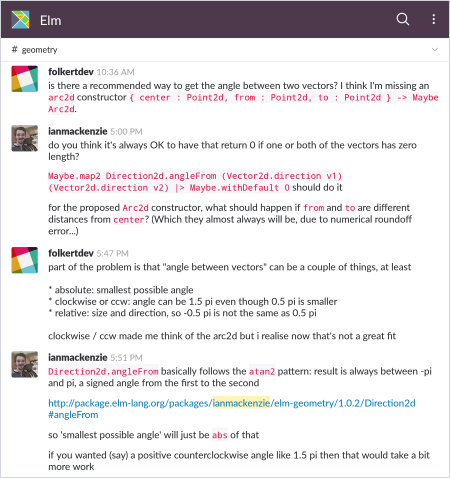 You can also try: