A library for general 3D rendering with WebGL

A simple API for rendering with WebGL. This is useful for both 2D and 3D rendering because it lets you take advantage of hardware acceleration with the GPU, meaning you can render things more quickly.

Here are some examples so you can get a feel for the API, but make sure you read on to learn how WebGL and the GPU really work!

To get the most out of this library and out of the GPU, it is best to pair some examples with a fairly solid understanding of how information flows through the rendering pipeline. This section gives a high-level overview of the pipeline and the corresponding terminology.

At a high-level, there are two general concepts to understand: meshes and shaders. The details of each of these are crucial to using WebGL effectively.

A mesh is all about triangles. By placing small triangles side-by-side, you can build up larger 3D shapes. We define each triangle by associating a bunch of attributes—like position and color—with each corner of the triangle.

We create and update our meshes on the CPU, so working with a model does not get any direct benefits from the GPU. Meshes are sent from the CPU to the GPU to be rendered. This transfer can be quite expensive, so it is best to try to avoid creating new meshes.

Some tricks to minimize this include breaking a mesh up into many smaller pieces that can be transformed independently. For example, if you want to render a skeleton, each bone could be a separate mesh, so rather than send a new version of the entire skeleton on every frame, you just send a transformation for each bone.

A shader is all turning meshes into pictures. A shader is a program that runs on the GPU, so it benefits from lots of parallelization. As a general rule, you want to be doing computation here rather than on the CPU if possible.

In Elm, shaders are defined with a language called GLSL. These are programs that take in small high-level values and do a bunch of rendering based on that. For example, you can send over a matrix that represents where the camera should be and all of the meshes loaded onto the GPU will be transformed accordingly.

The following diagram illustrates the entire pipeline. Keep reading past the diagram, all the terms will be explained! 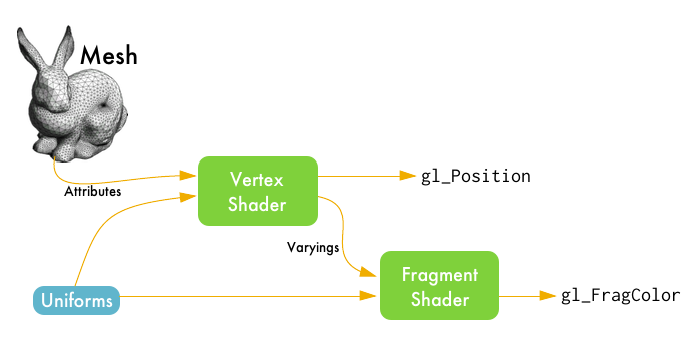 We start with a mesh. It's a bunch of raw data points that we want to render on screen. From there, the data flows through two types of shaders:

The flow of data between the CPU and each of our shaders is very well defined. To send information, there are three kinds of specialized variables:

Making the most of the GPU

A typical mesh may be quite large, with hundreds or thousands of vertices, each with a potentially large set of attributes. Working with a mesh on the CPU is expensive for two major reasons:

This library facilitates this by caching known meshes on the GPU. If you create a mesh and use it many times, it only gets transfered to the GPU once. Now if you update that mesh, the new version will need to be loaded onto the GPU separately. That means it is best to create a fairly general mesh and modify it with uniform variables in a Vertex Shader.

Shaders are written in a language called GLSL. This is a widely used language for shaders with websites devoted to sharing creative demos, so you will often be able to use that shader code directly in Elm. A basic vertex shader could be defined like this:

Within the [glsl| ... |] block, you just write plain GLSL. Elm is actually aware of the types of the attributes, uniforms, and varyings coming in and out of the shader, so the shader block is given a type that enforces this API. The type of vertexShader says that we have two attributes named position and coord, one uniform named view, and one varying called vcoord. This means Elm's type checker can make sure you are using the shader in a meaningful way, avoiding a totally blank screen that can happen if your shader has an error in it.